Fighting the Affordability and Climate Crises – with Free Transit!

The Russian invasion of Ukraine has radically altered human, energy, capital, and commodity flows around the globe. Like the pandemic, we know that warfare exacerbates inequalities within and between societies and derails human and sustainable development priorities.

Earlier this year governments in Spain and Germany announced social equity and green stimulus measures to tackle the affordability challenges hitting the poor, working, and middle class. Part of the intent, at least in Spain, has been to encourage regional mobility and to stimulate the tourism sector which lagged during the pandemic.

According to Jasmine Gadhavi in The Guardian, Spain’s socialist government announced that full discounts for up to four months — from Sept to Dec — would apply both to cercanias (commuter) and media distancia (medium distance) urban and regional rail routes of less than 300km) on the state-run rail network (RENFE).

Meanwhile in Germany, a 9 Euro priced monthly pass apparently permits anyone “living in or visiting Germany unlimited travel across the country on regional transport,” reports Kate Connolly. The German scheme has been in operation from June, and is slated to continue until the end of August 2022 on regional trains, buses, trams and underground rail networks.

The deeply discounted mobility policy was enacted by the German federal SDP-Green-FDP coalition and has apparently become so popular that there are calls to extend it, and to rename it a ‘climate [transport] ticket.’ The same coalition is now wrestling with the question of whether to impose speed limits on the parts of the publicly financed Autobahn freeway system (first devised by the Nazi regime), which some Germans consider ‘mobility freedom’, despite the evidence that lower speeds can significantly improve fuel efficiency.

With gas prices soaring the globe over, and in contrast to European transit interventions, some Canadian anti-taxation activists have taken an opposite tack. They have insisted that regions, provinces and even the feds should scrap or reduce transit and carbon taxes, so that Big Oil could apparently pass on price reductions to vehicle-dependent consumers.

In Ontario the recently re-elected Ford government introduced just such gas tax discount measures — at the same time as proposing an expansion of the 400-series freeway network around Greater Toronto, including into the greenbelt and valuable farming lands. It remains unclear if big energy firms will wish to abate the transfer of windfall profits to their CEOs and shareholders.

Even our big banks have gotten in on the game of trying to provide ‘relief’ to their customers with consumption discounts on gasoline purchases. Supporting customers or employees who take public transit does not seem to be part of Canadian big banks’ lexicon. Canadian energy and financial markets seem locked into some last-century assumption that mobility is a personal and private endowment. Except, of course, when it comes to public financing of road infrastructures to support private conveyances, which are then treated as public utilities for the common good. Without a doubt this is a key financial path dependency that has locked our nation into gas guzzling automobility and assumptions about urban forms and infrastructural choices that exacerbate the climate emergency, not to mention common pollution.

As numerous observers have suggested over the years (including here in Viewpoint Vancouver), not only does the expansion of public transit potentially have co-benefits like reducing vehicular emissions, tire/brake dust, light and noise pollutants, and greenhouse gases (GHGs) — it also provides an important alternative to auto dependency and expensive urban sprawl.

However, rather than moving toward free transit, our flagship Canadian transit and rail systems continue to rely too heavily on farebox revenues to augment instable government funding. Canada’s provincial and federal governments have generally been quite weak in their longitudinal commitments to supporting mass public transit or intercity rail, compared not only to European nations, but also increasingly many cities in the Global South.

This makes little sense, when reducing the cost of transit could not only address current energy affordability challenges, but would also send the important message that governments at all levels are serious about greenhouse gas abatement. Notably, the B.C. Green Party recently proposed free transit for up to three months — instead of a tax break to energy companies. This, however, appears to have fallen upon deaf ears at the current provincial government and at TransLink. Rubbing salt into the B.C. Greens’ proposal, TransLink moved ahead with a July 1st farebox increase.

There are, however, several somewhat hopeful signs in B.C. for pro-public transit measures that could be implemented quickly. First, the B.C. government kicked off an experiment — albeit poorly timed during the height of the pandemic — mandating that TransLink provide free transit for youth aged 12 and under. More incremental experimentation could be encouraged (and financed), such as free transit days or times of day.

Second, TransLink’s Transport 2050 outlines a massively expanded network of bus rapid transit (BRT) corridors, plus potential expansion of inter-city rail (using lines like the former B.C. Rail corridor). This would be very positive if matched by clear financial commitments and a means of public financing (including support for TransLink to get directly involved in Transit Oriented Development, such as affordable public housing). It is not clear if the Province and Feds will fund this much needed and visionary system-wide network expansion, other than through incremental pre-election announcements from time to time.

TransLink’s expansion of rapid transit such as BRTs could be visionary if the financing from B.C. and Canada were clearly earmarked. Instead, more incrementalism is expected.

If politicians and civil servants cater to SUV driver-voters and refuse to recognize transit users and renters as core voters, it will remain unlikely that free transit will ever be palatable in B.C. or even Metro Vancouver. The idea of free transit across B.C. Would require a concerted review of the governance and funding gaps that have locked both the suburbs and rural regions into perpetual car dependency. The elimination of Greyhound bus routes; the privatization and elimination of B.C. Rail passenger services; the privatization of B.C. Ferries; the continuous undermining of Via Rail services — all illustrate how British Columbians outside of suburbs have faced increasingly limited choices for inter-city mobility: they can drive, take a plane, or hitchhike. Meanwhile the fate of intra-city mobility governance and delivery remains highly problematic.

TransLink observer and critic Nathan Davidowicz — author of the Alternative Weekly Buzzer — has chronicled ongoing service cuts pre and during pandemic to TransLink’s traditional bus routes, and their extremely slow rebound to pre-pandemic service levels (compared to other systems in North America). He cites an ongoing stinginess in existing services, alongside unfair fare increases and capital-intensive showcase projects that lack pragmatism compared to provisioning of reliable bus services across the network and especially in the fast-growing suburbs of Metro Vancouver. This is hardly freedom-enabling public transit.

Davidowicz also compares chronic public transit disinvestments in B.C. to that of car-oriented Ontario, suggesting that B.C.’s transit governance has been in disarray because of the disconnect between the Province and local governance mechanisms like TransLink. Interestingly, Ontario’s coordinated regional investments in regional commuter rail services, subway, as well as expanded urban LRTs and BRTs (not just in Toronto but also in Ottawa and Kitchener-Waterloo-Cambridge) has resulted in strong public investments compared to a laggard B.C., despite our social democratic government. Notably, Greater Victoria has had no new investments in BRTs or LRTs, and the possibility of implementing LRT systems in B.C. continues to be ignored despite their resurgent popularity across North America and Europe. 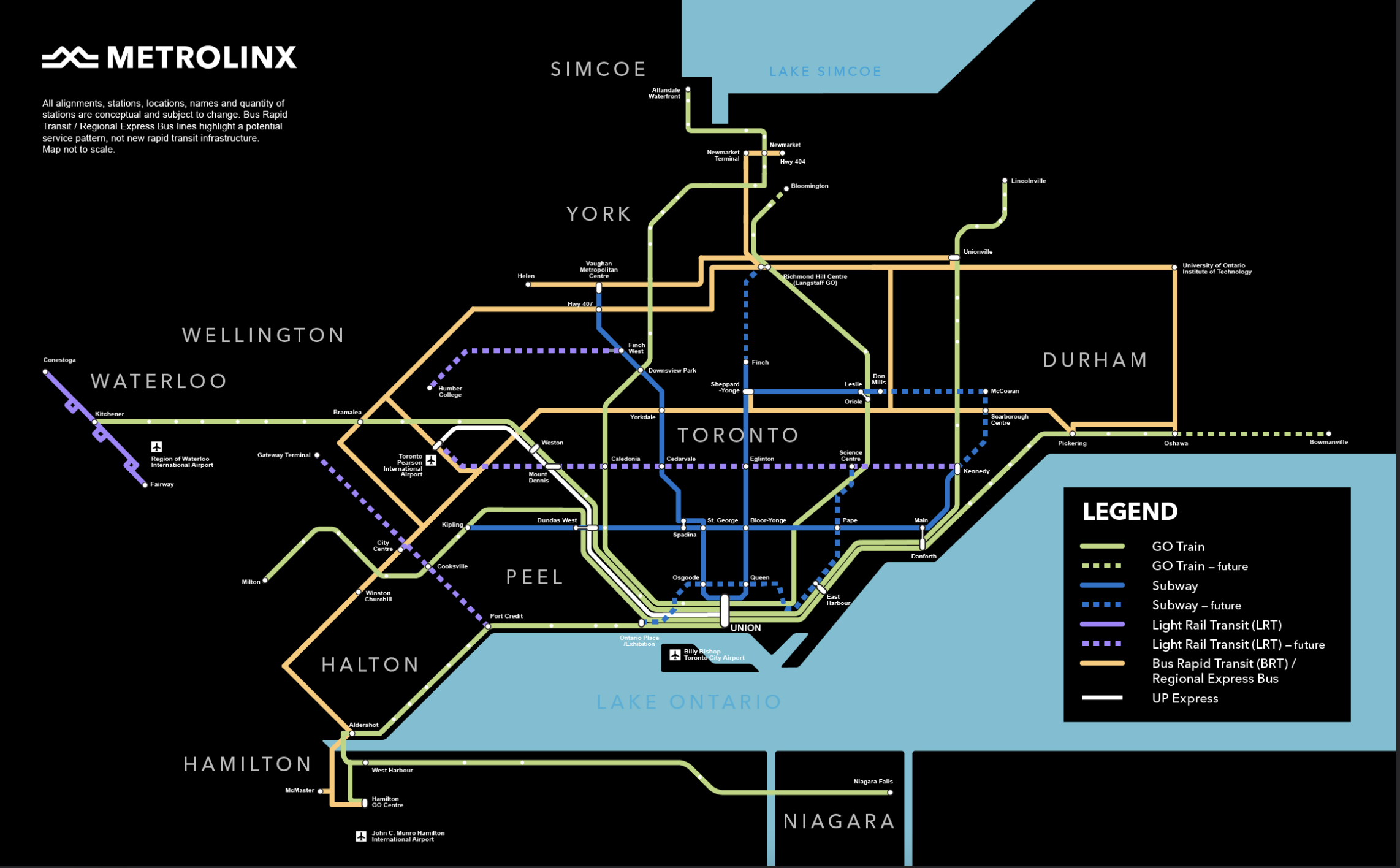 TransLink has arguably become a laggard compared Ontario’s concerted and coordinated approach to regional transit in the Greater Toronto Area and beyond.

To have free public transit we need stronger investments in coordinated transit governance in B.C. Perhaps this should start with our politicos beginning to ride and think like current and future transit riders, rather than like car, truck, or SUV drivers. Spacious, frequent, and electrified transit and rail can augment walking, biking, and rolling. Instead of investing public funds that induce expanding the road network for private or personal automobility, we ought to invest in measures that induce transit endowments. War, inflation, energy price hikes and the climate emergency are all strong reasons to invest more in equitable public transit. Paying attention to creative ideas on mobility elsewhere can potentially mobilize our thinking about such vital questions of public interest closer to home.

David Sadoway is Viewpoint Vancouver’s current Writer in Residence. Trained as an urban planner and an environmental manager, David is a faculty member and teacher in Kwantlen Polytechnic University’s Geography and Environment Department. Prior to coming to KPU he lived and worked in Asia for over 15 years. He is passionate about how people around the globe are working together to address common ecological, socio-economic, technological and political dilemmas. Find more info about David here.

13 #Changi #Jewel. If there is someone without a phone (just taking a photo or soon to take a photo) I don’t see them with my phone
Between the World Cup (screen behind me) and Christmas (in a largely Muslim, Hindi, Buddhist part of the world)
12 #Changi #Jewell. Perfect but for the pylons
11 #Changi #Jewel. There’s a feeling of Lawrence #Halprin’s west-coast rain-forest landscaping designs from the 70s (like the Portland fountains) massively scaled up for the tropics
9#Changi #Jewel. Designed for ‘gramming.
8 #Changi #Jewel. Ta da!