I will be regularly updating this post to the end of the year to recognize the pedestrians that die on City of Vancouver roads and sidewalks. To November 14 2021 there have been ten pedestrian deaths in the City of Vancouver. Four of these deaths were from November 2nd to November 16. The dark months of winter in Vancouver are when vehicle drivers kill pedestrians. These deaths are entirely avoidable. Driver speed, inattention & alcohol/drugs are the major factors. Road design can lower driver speed to survivable levels.

In the City of Vancouver there have been 18 collision related deaths  from January 1 to  November 15 2021.

This is always the most difficult to write, collecting the information on the serious injuries and pedestrian fatalities in Vancouver. It is made harder with the lack of easily accessible statistical information from the Province, most likely due to the reallocation of resources in monitoring and tracking statistics related to the Covid pandemic.

Within the City of Vancouver including UBC from January to  November 2nd there were  six pedestrian deaths and several life altering injuries.

And from November 2nd to November 16, just 14 days? Four more pedestrians died on Vancouver roads and sidewalks. That’s ten pedestrians who did not get home.

Two of these crashes involved drivers who drove vehicles over the curb, killing a 23 month old toddler at Smithe and Hornby, and two 18 year old students at Northwest Marine Drive and Thunderbird at UBC.

Two other pedestrians died in separate crashes when they were hit crossing in marked pedestrian crosswalks when the vehicles were turning left through the intersection.

One last October was a much loved mom walking home from work at Tenth Avenue and Sasamat in Point Grey. She was reported in the press as being “elderly” as she crossed the marked intersection as if that made up for being mowed down by the inattention and carelessness of the driver. As her distraught family responded, this physically fit woman was far from “elderly”.

Yesterday a child was struck by a vehicle driver when she was crossing at a crosswalk at East 11th Avenue and Clark Drive.

Another pedestrian is in hospital with severe head trauma when he was struck while crossing in a marked intersection at Fraser and 4lst Avenue.

And on November 13 a  59 year old pedestrian was crashed into by a vehicle driver while he was trying to cross Kingsway Avenue near St Catherines Street.

On November 16, a wheelchair user was killed at Davie and Thurlow Streets when a Dodge Ram driver was in a crash and the vehicle then veered onto the sidewalk.

There was some early buzz that less driving during the early months of the pandemic would result in substantially less fatalities. Sadly in British Columbia last year 240 people still lost their lives in car crashes. Six of those people were cyclists, and 35 were pedestrians. Of the cyclists, four were male and two were female. Of the pedestrians, twenty were male and fifteen were female. In 2020 no cyclist was killed in the City of Vancouver by a vehicle driver.

The Insurance Corporation of British Columbia (ICBC) observes that November, December, and January are danger months when vehicle drivers crash into pedestrians with more frequency, with dusk being the worst time. Even more sobering most pedestrians are being crashed into at intersections, with the majority  of those crashes happening when the pedestrian actually was legally crossing and had the right of way.

Here are the statistics from the corporation showing how much more likely pedestrians are to be crashed into in Metro Vancouver:

The numbers are unsettling.  And in the dark winter months between October and January an average of 1,080 pedestrians are injured in crashes compared to an average of 570 pedestrians between May and August. Those figures are based upon a five year average between 2016 and 2020.

When reviewing crashes,Police report sixty different contributing factors to these fatalities. For deaths between 2016 to 2020 driver speed, driver distraction, and driver being impaired were the top three factors.

The BC Coroner’s Service notes that pedestrian deaths are more frequent in the fall and winter. The most deadly month for sidewalk users is November, followed by January. Of all pedestrian deaths, 28 percent are in Vancouver and Surrey, with 58 percent being males.

Most striking is that nearly 60 percent of pedestrian deaths are people aged fifty years and older, while one third are 70  years and older. These statistics clearly show that more education and information outreach needs to go to seniors  on how to stay safe.

And the reasons for these road  deaths is haunting. Alcohol and or drug impairment contributes to 52 percent of deaths in 19 to 29 year olds, and 51 percent of deaths of 30-39 year olds. What that means is that half of all road deaths in British Columbia for people between 19 to 39 years of age is directly related to driver intoxication.

Metro Vancouver is unique in having dark, wet winter days and evenings without the reflectivity of snow. Add in dark clothing and umbrellas on the street, and it is difficult for vehicle drivers to see and for vulnerable road users to be visible.

It has not been seen as acceptable to wear reflectors or bright clothing while walking in Metro Vancouver’s dark rainy winters. Those actions are derided by many groups who perceive wearing small reflective objects  as putting the onus for safety on the pedestrian.

And a quick aside: the Mountain Equipment Co-op (MEC) “Seattle Sash” was developed by MEC designers with Vancouver City staff, as a universal add-on when biking or walking in grey rainy nights. It turned out to be a best seller. 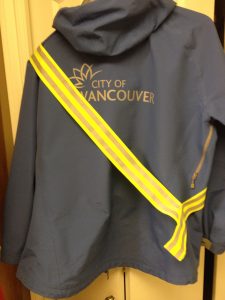 The Walk and Be Seen Project developed  by Lynn Shepherd and Sabina Harpe at the Kitsilano Neighbourhood House worked at boosting seniors’ confidence to walk in the evening  by encouraging them to wear some type of reflector at night. This has been proven to be effective in Nordic countries, where small reflectors on winter clothing are perceived as a normal part of life.

Finland invented the safety reflector and has laws requiring pedestrians to wear or carry small reflectors on bags or backpacks when out in dark conditions. The Norwegian Council for Road Safety suggests reflectors can reduce the risk of being crashed into by 8 percent by allowing a vehicle driver a bigger field of vision. “Driving at 50 kph (30 mph) this gives the driver only 2 seconds to react. A pedestrian’s reflector can be seen shining at 140 meters in the headlights, giving the driver a full 10 seconds to see you and react accordingly.”

Besides the precautionary care of pedestrians, the most important factor is to address the speed,  distraction and  impairment of drivers and road design. All of these factors are out of the pedestrians’ control, which means that vigilance and demanding that regulatory changes happen to slow driver speeds everywhere.  Several years ago the Union of British Columbia Municipalities unanimously approved a motion to ask the Province to allow for 30 kilometer per hour designations for residential areas off arterials. This would allow these areas to receive this new lower driver speed limit without placing costly signage on every street. That way municipalities can concentrate on slower street road design.

The province has never responded.

Perhaps pedestrian safety will become a mother’s issue, much like MADD (Mothers Against Drunk Driving) wanting everyone to come home safely.  Eventually pressure will be  put on the Province to insist on the lowering of road speeds,  and  to ask for steeper penalties tied to driver distraction and driver impairment. This just needs to be done.

Here is what I wrote last year at this time on this issue, and it still stands today:

“Surely it is time to have a serious discussion about stopping these needless pedestrian deaths in Metro Vancouver. That can be accomplished by lowering speed limits in residential areas  (as already mandated in an unanimous motion of the Union of British Columbia Municipalities) addressing  driver education, behaviour and inattention, creating better intersection visibility and better road design that limits speed on arterials.”

How can we get this done?