A quick review of the newspapers of the 1970’s and 1980’s  outline what a radical idea the development of the south shore of False Creek was at the time. It was a new way of planning, of placing people in open public lands that were available to the city. There was a planned three way split in terms of housing by low, middle and high income to represent a mix of people.

In February 1974 the False Creek planner quit, accusing Council (which was at that time dominated by TEAM members) of trying to get construction underway before the Fall municipal election. Councillor Walter Hardwick was the chair of the South  False Creek Committee of Council. Blame also was assigned to  Councillors Harry Rankin, Mike Harcourt and Darlene Mazari for plunking housing in places where people should not belong, because of “soil condition, water pollution, traffic problems, microclimate, practical economics and logistical site planning”. 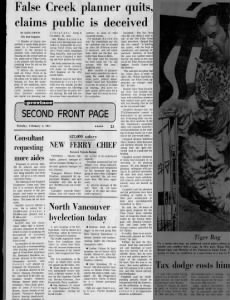 Almost fifty years later, we know that many of these identified issues have been resolved, but one…the topographical challenge of going south up to  Broadway for groceries by foot  could not easily be met. But in every other way the 1,849 units which house 5,500 people has become a great place to live. There’s easy access to waterfront pathways, there are parks to walk or bike through or to, and there is a school. One of the earliest identified uses was that this space which was previously in industrial use should be a park. By its design it also serves as a park and a connection between Olympic Village and Granville Island for residents and visitors to the city.

And here’s how that early ads for the first phase of False Creek South appeared, in 1978. Take a look at the type font which screams 1970’s. 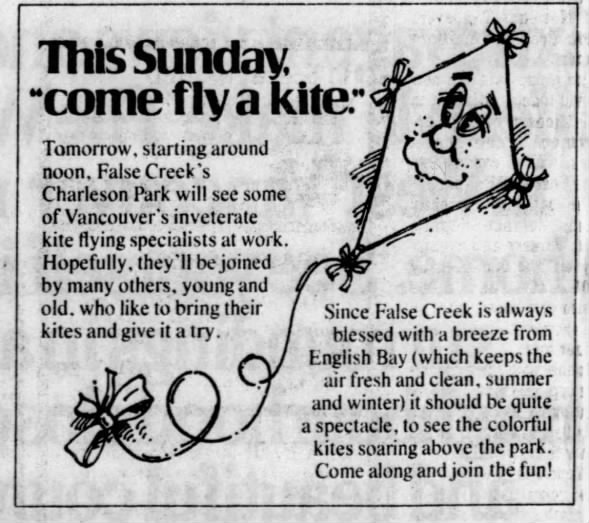 The first phase of housing celebrated in this opening had units for “singles, couples, families, senior citizens and the handicapped. ” The community even offers fully serviced facilities for people to live on board their boats”. Early estimates were that 1,000 residents would be grouped  near the docks hosting 40 marine liveaboards.

Residences were “built on the doughnut cluster” principle, with every unit having sunlight and a view. The hole in the doughnut was defined as a private outdoor space for the units in each cluster, connected by walkways.

At the time, the south shore of False Creek was absolutely remarkable. There were walkways along the water, and to parks, and people moved through the development effortlessly whether they were residents or citizens walking through. As the Vancouver Sun stated at the time “this has achieved what many long considered impossible-the rescue of the city’s most picturesque waterfront playground from years of neglect…destined to become a residential and recreational showpiece without equal in North America”.