Frank Murphy and Myra Thomson are involved and engaged citizens that now live in Nanaimo. When downtown revitalization and walkability guru Jeff Speck came to Vancouver to speak pre pandemic, it was Frank who arranged  for City of Nanaimo Councillors to be able to hop aboard a ferry and be taken into Vancouver to meet with Jeff Speck. This couple are those kind of people. You can find out more about Frank at @1sidewalkballet and @NanaimoCommons on Twitter. Myra can be found at @NoplacetogoNan.

Photo  Camerawork Graphics: Photo by Kiku Hawkes. Frank Murphy in front of the graphics studio at 505 E. Georgia. (Also in The Jackson)

Before moving to Vancouver Island, Myra and Frank lived in Vancouver. That’s  a photo above of Frank outside his shop at 505 East Georgia Street.

Frank owned Camerawork Graphics, a small graphics studio he set up and ran from 1979 to 1985 in the Strathcona neighbourhood.  Frank did everything: he was skilled in  graphic design, paste-up, typesetting and line-camera. He was a LithoPrep Journeyman. 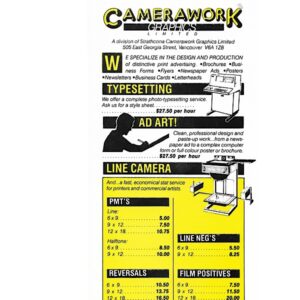 Frank and Myra lived at “The Jackson” building located at 660 Jackson Avenue. The couple lived in the top northwest apartment of the building in the 1980’s paying $500 a month for a one bedroom. Their one bedroom had access to a rooftop , of course with no proper decking or railing. These photos, with the views of surrounding construction and the city were taken exactly four decades ago.

Strathcona Roof Garden: Photo by Mark Murphy. Frank Murphy and Myra Thomson on the roof of ‘The Jackson’. 1981.

In the photo above Myra is on the roof with Frank. She  is pregnant with her daughter who is now 40 years old and is now pregnant herself. You can also see the Lord Strathcona Elementary School at 592 East Pender and the Chinese Public School at 499 East Pender in the background.

As Myra describes it The Jackson “had a great downtown and mountain view. The stairs to the rooftop were right outside our door. An eccentric and wonderful American expat by the name of Jim Medill had renovated the whole building. Frank was the first tenant in the newly renovated version. 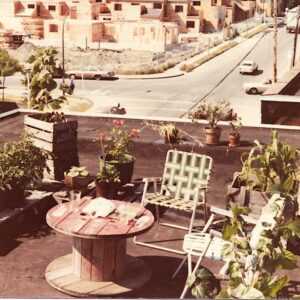 Jim Medill also had beehives on the roof – at the other end from our garden.” (Editor’s note: Mr. Medill, with 20 hives, grew 400 pounds of honey per hive on this roof. The building was close to the BC Sugar packing which would have provided the sustenance.)

“I grabbed wooden boxes from the alleys and back doors of the Chinatown shops and filled them with soil to plant veggies. The garden had cauliflower, corn, broccoli, lettuce and who knows what else. Also a nice hibiscus at one point. 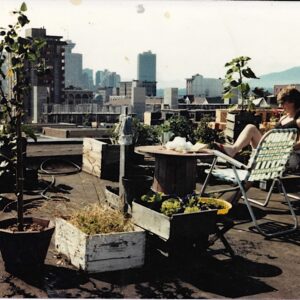 There is a picture (somewhere) of our baby Meghan standing in a playpen that was on the roof.
We loved Chinatown – the BBQ duck, the dim sum, the bustle of the markets. The Strathcona Hotel at one point had a restaurant with a fabulous chicken and peanut dish. My favourite place was Maxims. The beef curry pastry and the egg tarts!

We were such regulars that we were given a discount. Another favourite thing was the Chinatown grannies who would always stop and admire the baby and make sure that I had her covered up enough from the cold.

We also loved Benny’s which was just around the corner. Benny contributed a platter of appies for a business opening party that we had at Camerawork. Lovely man.
‘The Jackson’ is still there and looking great.”

Myra signs her notes with a quote from the song One Fine Day written by by David Byrne and Brian Eno in 2008:

“Then a peace of mind fell over me —
In these troubled times, I still can see
We can use the stars, to guide the way
It is not that far, the one fine day.”