If you worked at City Hall in the 1990’s and 2000’s, you knew Ralph Segal. He was the senior architect/urban designer/development planner in charge of the Planning Department’s Urban Design and Development Planning Centre comprised of eight architects/urban designers and support staff. 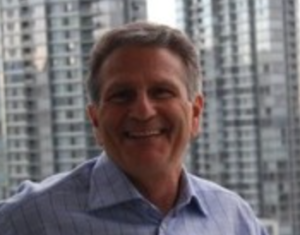 Ralph’s door was always open. The task of his group was testing major rezoning and development permit decisions against the City’s urban design and architecture parameters. His team also provided critical urban design thought behind the comprehensive design guidelines for the downtown precincts and neighbourhood plans.

Mr. Segal has submitted the following commentary on the Broadway Plan to Council. His submission to Council has not been edited or changed, and the full submission  is below.

The Broadway Plan, with subway extended to Arbutus St. soon to be opened, correctly
calls for a substantial increase in densities along this major artery. With new subway
service, this is a worthwhile strategy that would enhance the street’s already important
role.

Taller buildings on Broadway along with one or two “landmark” structures at particular prominent intersections atop subway stations are appropriate.

However, the Plan’s proposed significant densification extending north and south of Broadway (From First/Sixth Ave. to 16th Ave.), effectively the entire remainder of the Plan area, does not take into proper account two critical factors.

Second, the Plan,apparently embracing the false narrative that housing un-affordability will be solved by major up-zoning of present residential densities along with substantial building height increases over expansive areas to be developed for housing by the private sector,
ignores one of the most critical causes of our housing un-affordability crisis, namely
land speculators/investors and property “flippers” skewing the normal workings of real
estate property values.

In reality, such a strategy would be a dream scenario for the land speculators and property “flippers” who would profit from the ever increasing land values triggered by this proposed major densification to the Plan areas north and south of Broadway. 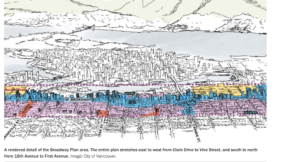 These huge density increases would put the existing rental stock at risk.

Should Council be so unwise as to approve the Plan as presented, a flood of transactions on properties beyond Broadway proper that are designated for major densification will be unleashed, driving their values ever higher, thereby making delivery of affordable housing that much more unviable (insufficiently profitable).

This would necessitate yet further up-zoning to cover increased land costs. The deleterious effects of this phenomenon are already evident elsewhere and would be magnified should Council fail to send this Plan back to the drawing boards with an instruction that expansive densification of areas north and south of Broadway be eliminated or significantly cut back to absolutely minimize displacement of tenants.

Essentially, the existing RM, FM and RT zoning should be retained, perhaps with carefully crafted amendments that provide for compatible new rental housing on those few specific sites where existing apartments can be confirmed to have truly reached end of life.

Interestingly, the Mayor’s announced tenant relocation compensation program to soften the blow for displaced tenants is now being cited by staff as serving to put a constraint on the rapidity of rental development so generously incentivized in the Plan.

One wonders if the need for such a comprehensive program brings into question the fundamental premise of the Broadway Plan regarding these flanking neighbourhoods.

To be clear, I have as an architect and Vancouver city planner been a strong advocate
for density…in the right locations (1477 Broadway), many of which are
already described in existing rental policy and in numerous neighbourhood plans,
recognizing that judiciously located increased density can deliver not only the city’s
needed rental housing development but also improve the economic viability of
neighbourhood commercial/retail (more customers) and can often contribute specific
needed facilities to the areas into which that added density is inserted.

These criteria have been enunciated and implemented through focussed city policies (most recently “Secured Rental Policy” approved Mar. 2022) and existing detailed neighbourhood plans (eg. the comprehensive Cambie Corridor Plan first approved in 2011) which have prescribed increased density and urban designconsiderations that for more than two decades have delivered a body of work now in
place that has won Vancouver acclaim internationally as a model for modern citybuilding.

As part of the Cambie Corridor Plan for example, the Oakridge Municipal Town Centre precinct surrounding the Cambie Line station at W. 41st Ave. is now delivering thousands of rental units of which 20% will be affordable, transforming under-performing (in city planning terms) single family area into a sustainable, mixed use,high density, planned community, without any displacement of renters.

An unintended outcome of this past work (in addition to Vancouver’s natural beauty),has made our city an attractive destination for both domestic and foreign investment.

So attractive that this eager investment interest began, from about 2014, to noticeably
impact the normal forces of supply and demand in real estate as property values began
to climb skywards, the direct result of the City’s offering to the private sector, major
density and height increases through now several hundred spot rezonings for rental
housing and further density and height for a meagre 20% “affordable” units (below
market rents).

This strategy in pursuit of increased supply of rental that would, it was
hoped, moderate or even lower unaffordable rents, failed to recognize that ever
increasing densities merely fuelled land speculation and property “flipping” with
resultant ever-climbing land values fed by the compelling desire of investors to hid their
money in and profiteer from Vancouver real estate.

While the Broadway Plan repeats a number of existing fundamental city planning
principles such as substantive density increases along rapid transit corridors, the
Plan’s proposed huge densification north and south of Broadway would play directly
into the hands of land speculators.

But such an outcome is entirely unnecessary, the remedy being to focus
densification directly on Broadway itself while basically maintaining the existing zoning
of the stable, well-functioning neighbourhoods of Mount Pleasant, Fairview, Fairview
Slopes and Kitsilano.

This would include the present RT areas with their canopy of existing trees where well-understood “gentle densification” can make development of 5 units (or 6?) per lot very attractive (duplex, 2 secondary suites, laneway house), ideally encouraged with accelerated permit processing and a modest density increase (say, 0.9-1.0 FSR from zoned 0.7 FSR) for lane houses as rental.

This would notably advance their contribution to more affordable ownership and rental units in the long term.

We seem to have forgotten the greening of our environment maintained by this
form of development versus hi-rise concrete apartments requiring lot assembly and
underground parkades with the loss of mature trees that contribute to air quality.

In terms of Broadway itself, Council’s approval of the rezoning for the 39 storey 1477
W. Broadway development (at Granville), while an eye-popping increase in density
4 times the zoned density) and height, was the correct decision for this specific site atop
the future subway station at the intersection of two of Vancouver’s most important
streets, one of which signals the Granville Bridge entry to the Downtown peninsula.

Neither the Broadway Plan or the Draft Vancouver Plan was needed for City Staff to
recommend its approval. Because this site has been owned by astute developer PCI
since 2007, land speculation was likely not a factor in its earning of increased density.

The one criticism that could be made is that only 20% of the rental housing component
will be “affordable” (about 45 of the 223 total units) as per present rental policy which
frankly should be boosted to 40% “affordable” in the Broadway Plan to meaningfully
address the city’s dire need.

And this can be achieved in the right locations without any further increase in already generous -many would argue too generous- densities and heights now being typically considered and granted.

Concentrating high density development on Broadway itself that preserves view corridors should create a skyline composition of urban design distinction. The generic diagrammed tower + podium “Typologies” shown in the Plan, while useful in depicting building scale, are frankly too formulaic and do not evoke confidence that the city’s future Broadway, through its urban design, architecture and green innovation will become a “Great Street that is memorable and recognizable” (from Broadway Plan), worthy of the prominence this major street deserves.

A few “mass timber” illustrations would be more informative.

The Broadway Plan needs further close examination as to whether its approval would
set this important precinct on the proper course over the next 30 years as an example
of our approach to city building that addresses the needs of all residents, present and
future, as well as the complex challenge of housing un-affordability, while taking into
account this corridor’s unique context, diversity and character -its “soul”.

This harsh critique has nothing to do with Nimby-ism. City plans, development policies and zoning are intended to provide a degree of predictability w.r.t. potential development and overall scale and density.

This Plan does the opposite in respect to the existing neighbourhoods north and south of Broadway.

If approved as proposed, at any moment a site could be randomly assembled from two or more lots with neighbours confronted with an incompatible 6 storey, or more likely, 20 storey apartment next door.

The presently stable neighbourhoods providing a high proportion of rental housing
would be turned into a development free-for-all.

16 #Changi Clouds
15 #Changi #Jewel. In case you were wondering, this is the world’s tallest indoor fountain.
Privilege without apology. Asian cities like #Singapore and #Seoul and #Shanghai (and emerging ones like KL and more than you know of) are rather like what American cities felt like in the 60s - prosperous, slick, expanding technologically, culturally confident, attracting the young, ambitious and impatient.
13 #Changi #Jewel. If there is someone without a phone (just taking a photo or soon to take a photo) I don’t see them with my phone
Between the World Cup (screen behind me) and Christmas (in a largely Muslim, Hindi, Buddhist part of the world)
12 #Changi #Jewell. Perfect but for the pylons