The Canadian War Museum & the Story of Kurt

The Canadian War Museum has been open for 16 years now and was designed by  Moriyama and Teshima Architects. It is nestled in a hill in a former Ottawa industrial area and has sweeping views of the Ottawa River and the Parliament Buildings from within.

The building tackles the difficult question of how to build a structure that talks about war and peace in an eloquent manner. The structure  is understated, quiet, and unassuming in the landscape. Like a bunker the design is nestled in the earth and has a sloping green roof.  Internally the building is concrete, walls have angles, with  space and voids used to encourage thought and contemplation.

It is an interesting structure to visit and the programming of the museum encourages a diversity of users. There are courses on swordcraft for children offered in the lower hall as well as spy and castle workshops.

Some of the halls are scented with gunpowder and the oil and metal smell of machines. The galleries talk about peace, reconciliation as well as war, and what the parameters of peace look like. There are copies of the certificates that the City of Vancouver had hand produced for returning soldier residents.

And in Regeneration Hall light is muted for contemplation with the extraordinary barred views of the Parliament Buildings, bringing in the juxtaposition of war, peace, and government.

On the lower floor of the museum is a display of vehicles and you can find Weather Station “Kurt” there.

“Kurt” was a  World War Two weather station that was left on the tip of northern Labrador by a German U-boat crew in 1943.  The placement of this Nazi weather station was the only known “armed German military operation on land in North America” during the Second World War.

Its purpose was to send weather readings every three hours, and could operate independently for six months. This would provide weather  information for submarines and U-boats on the Canadian coast.

The U-boat is an  abbreviation of Unterseeboot, (“undersea boat”), which is a German submarine that was used to torpedo ships in the First and Second World Wars.

To hide it from any suspicious Canadians, the equipment was branded “Canadian Meteor Service” which of course was a grammar mistake and would have attracted attention if noticed. There were also empty American cigarette packages strewn around the site by the German navy to make it look like Americans had done the work constructing the weather station.

But it was not until 1977 that this “meteor” station was rediscovered by a geomorphologist. A retired engineer also read through some German U-boat manifests and became aware of the station. In 1981 the station was retrieved and brought to Ottawa to be  installed in this museum.

From  1942 to 1944  U-boats had prolific activity along the Canadian coast. They had torpedoed and sunk the passenger ferry SS Caribou that travelled between Nova Scotia and Newfoundland with 137 people being lost in October of 1942. In the Battle of the St. Lawrence 23 merchant ships were sunk and 4 Royal Canadian Navy ships with a loss of 340 lives. This information was held back from the public at the time.

There were even two German spies that landed from U-boats in New Brunswick and Quebec. One immediately aroused suspicion, the other gave himself up to authorities.

That is one example of the many stories in the museum that knit with Canadian history and cover a range of issues and topics, from Japanese displacement during the second world war to contemplating how peace is achieved and maintained. You can find out more about the museum here which also has an online Remembrance Day resource.

This just published video has a war museum interpreter explaining the significance of  architect Raymond Moriyama’s museum design, as well as some of the nuances of the structure. Douglas Todd’s article in the Vancouver Sun about the opening of the museum is also below. 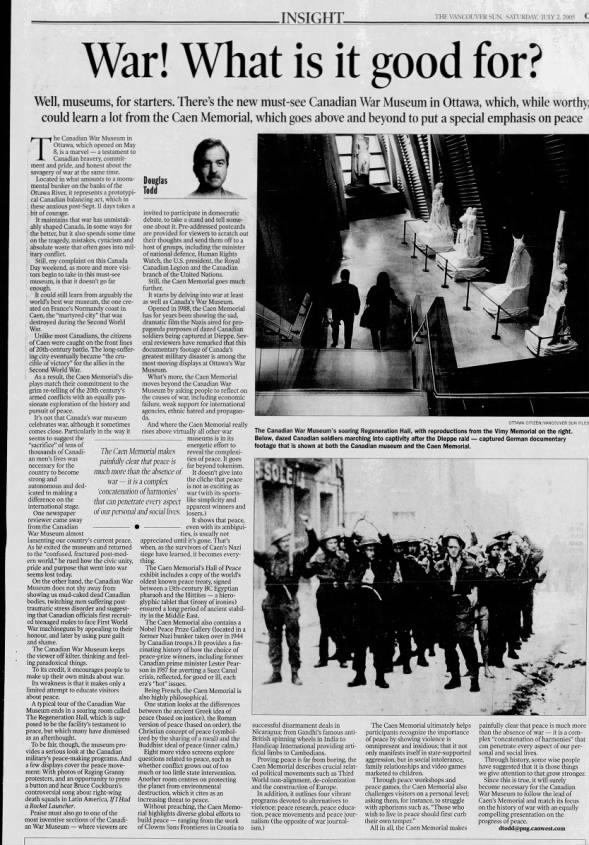