Vancouver’s 1970 Battle of the Beach: Parking or Public Access? 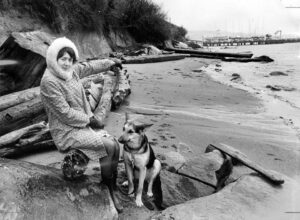 If you were on the planet in the 1970’s you will recognize the strange egg shaped fur hat  which instantly dates this photo to that time. This is Marion Leonard who lived above the beach at 3697 Cameron  with her dog  Lady.  You can see the pilings of the Royal Vancouver Yacht Club’s docks at Jericho just behind.

This wonderful photo was posted by Garry Korhonen  on the Facebook page Sentimental Vancouver.  He captioned the photo from the Vancouver Express as:  “Protesting plans to convert private beach to  a public parking lot for Royal Vancouver Yacht Club are Mrs Leonard and her dog Lady. Club’s proposal calls for 179 vehicle lot to be constructed on beach below Pioneer Park north foot of Alma”.

This is the park where the pioneer Hastings Mill Store is located.

You can’t make this stuff up. And here is how it happened.

Tom “Terrific” Campbell was a mayor from the NPA party  and he had willingly posed on a demolition wrecking ball as a posted photo. This Mayor Campbell was a lawyer,outspoken, and unabashedly pro development. He championed the decimation of Strathcona and Chinatown for a new highway. He urged the building of the underground mall in downtown Vancouver, wanted to demolish the downtown Carnegie Library, and wanted to build a hotel on Stanley Park.He also turned out to be invested in some of the projects he was urging development for. 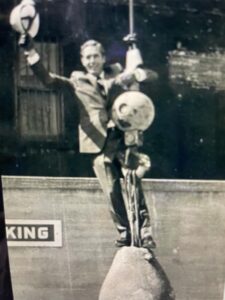 The “battle of the beach” began in February 1970  when city hall’s Technical Planning Board approved an application from the Royal Vancouver Yacht Club (RVYC) to build a private parking lot for 179 vehicles on the beach below the park on Alma. The lot would be 530 feet long and jut out 160 feet over the water’s edge.

Here’s the kicker: This parking lot would adjoin the Royal Vancouver Yacht Club’s property at 3511 Point Grey Road and the entire project had previously been approved by the Park Board.

The RVYC leases the water lots in front of the park from the provincial government for floats and for water access.

Two days after the approval from the Technical Planning Board, the Board of Appeal (now called the Board of Variance)  heard six appeals against the application (which can be done on the basis of hardship), but ruled in the yacht club’s favour. At Council the vote was 5 to 4 in favour of the yacht club with Mayor Tom Campbell of course voting for the parking lot.

Over four hundred residents rallied against the project at a public meeting, with Councillor Harry Rankin in his undeniable use of verbiage and wit proclaiming the project as “incredibly incompetent and stupid”.

It was Art Phillips (who later served as mayor in 1973) that suggested that the project be deferred until December of the year after a new Council had been elected, pointing out that two senior city hall staff (who just happened to be the city lawyers) Russell Baker and his deputy Charles Fleming) were also yacht  club members.

The case for approving the building of a parking lot on a public beach fell apart. But here’s what Mayor Tom Campbell has to say about the project at council:

“We have to consider what was best for the children of Vancouver who use the club. We have to consider how it affects the beach. The land there isn’t really a beach. It’s on a lease to the club and unavailable to the public in any event. There was a suggestion that parking be provided on city land in a residential area but that would amount to subsidizing the yacht club and we couldn’t consider that. It was a most difficult decision to make but we decided it would be more benefit to allow the parking than to not allow it”.

“Its a form of political senile decay setting in. If you were to list waterfront uses, a parking lot would be about 10,000th on the list. This decision is the ultimate in arrogance as far as the NPA is concerned”.

You can read some of the story in this Province Newspaper from March 26, 1970  here and also take a look at the old council reports in the archives on this  kiboshed beach parking proposal. 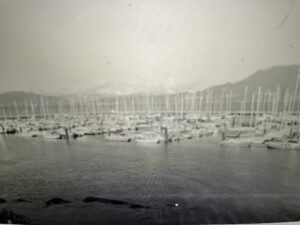