Peter Ladner:  John, I hear you’d like to be mayor. But as cyclists know, if you tilt too far to one side, you can fall over and crash. To borrow another cycling metaphor, it’s all about balance.

Now that you have gone out on a dangerous limb to oppose safe cycling and walking for all in Stanley Park, I want to propose a slam-dunk opportunity for you to show some balance.

As a former NPA politician myself, I learned, as I’m sure you have, that canny politicians figure out where the parade is headed, and then step out in front and “lead” it.

Be careful limiting yourself to support from people stuck in their cars.

No doubt you’ve heard that so many seniors and others have taken up e-biking that you can’t find one to buy these days. They describe e-bikes as “life-changing” (no more hills— ask Angus Reid!) as they add to the numbers of people who have already made cycling the most popular form of recreation in our fair city. The Cycling Lobby is working feverishly to get more kids riding safely to schools. Don’t make their parents your political enemies!

But before I share my win-win proposal with you, let me share a few thoughts about what you are calling “the Stanley Park transportation disaster”. At first I thought there might have been another storm that blew down hundreds of trees and blocked roads. Especially when I saw your colleague Tricia Barker describe the situation as “horrible” and “devastating”. And I saw your retweet of someone saying traffic changes have “spoiled our beautiful park.” This could cause a person to get worried.

Then I realized what you were actually talking about was the discovery of the park by more than 400,000 (by now) cyclists taking advantage of the new protected lane(s) through the park – even while it’s accessible for everyone else now that one lane has reopened for cars.

You and Tricia Barker – and some of my (literally) old NPA colleagues – are urging people to sign a craftily-worded petition to “Keep Vancouver’s most beautiful park accessible to all.” Everyone wants that, so it’s easy to get people to sign (29,000 and counting so far: let’s get more!).

I regret to tell you I’m not signing because I think you might twist my signature into meaning I support restoring two lanes of car traffic. I said “crafty” because that is nowhere spelled out in the petition, just the ominous threat that keeping a protected bike lane “could mean limiting access for people who choose to, or must, access the park by car”. I’m afraid I’ve lost a little trust in you, so I’m leery.

But how lucky we are there is zero data to show that anyone has been limited in accessing the park, or restaurants (operating at 50 percent capacity), or available handicapped parking spaces!

Yes, we could do better. One simple example: the bicycle bypass through the parking lot at Prospect Point Café could easily be shared with cars that could then use some of the now-closed parking spaces, without ever crossing a bike lane. Join me in supporting that!

Entrance to Prospect Point parking lot, with plenty of room for shared lane

I fear that you can only deny facts for so long before someone calls your bluff and your credibility disappears – and with it could go some votes!

I find it sad that you have embraced the fictions that seniors and disabled people are being denied access to the park, and that the park is (going to be) so congested that its restaurants will be ruined. Honestly, do you not find it amazing that detouring tens of thousands of cyclists past her business’s front door, not COVID restrictions eliminating tour buses, not her refusal to embrace this new mother-lode of customers, is what makes Prospect Point owner Nancy Stibbard “very,very sad”.

What is very, very sad to me is hearing someone say their business may die because tens of thousands of new customers are now forced to go to it, but a few traditional customers may not be able to park their cars.

I have been past the Prospect Point Café several times since it reopened and have never seen the available parking spaces full.  Of course maybe the parking lots aren’t full because business owners are saying they’re too full, convincing car-bound customers not to come. 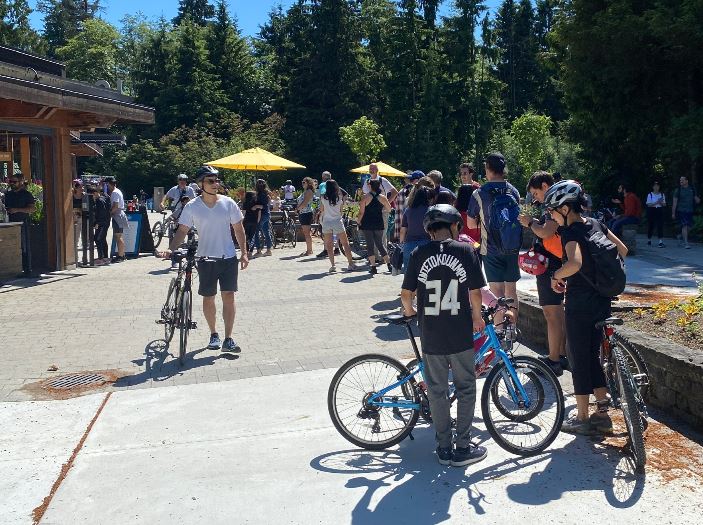 I have seen lineups of cyclists coming in to buy things. Cyclists outnumber car drivers by, maybe 10:1.  (I could be wrong.  It might be 20:1.)

A lawyer friend of mine (also a friend of Wally Oppal, who I see has suddenly become an expert on Stanley Park traffic flows), once warned me that launching a lawsuit (which Mr. Oppal has been rumoured to be part of) can backfire badly. You have to play up your victimhood.

In this case, instead of pivoting to serve and embrace cyclists, Stanley Park businesses and their allies are crying about lawsuits, gridlock, lack of parking, inaccessibility and even human rights violations.

You can’t cycle there unless you’re a “beyond seasoned cyclist”, warned poorly-chosen spokesperson Nigel Malkin: “This is not something where families and children are going to be able to ride around.”

Just between us, John, he’s wrong.

Last Friday I counted 68 duffer cyclists – families, children, seniors on e-bikes and others not wearing lycra or riding nice road bikes – peaking the hill at Prospect Point. This compares to 34 speedy people in lycra. That’s twice as many non-elite cyclists. A friend counted on another day and reports that he was passed by, or passed, 42 duffers compared to 15 people wearing lycra shorts. That’s almost three times as many non-elite cyclists who really like to stop and rest at the top of the hill.  I’ve written elsewhere about my five-year-old grandson regularly riding up the big hill with his mom.

Basically the anti-bike lobbyists are telling car-bound customers how terrible the park is so they’ll have a case for pushing aside cyclists to make room for tour buses that have disappeared!  Now that’s a recipe for business disaster.   As a seasoned business executive, John, you should be counselling these people, not Wally Oppal channelling his buddy Bruce Allen!

But I have digressed. A lot.

Here’s my plan for your redemption – not in Stanley Park but in Kitsilano. Tricia Barker can use this too, since you are both unflinching champions of safety and accessibility for seniors in our parks. (Me too, by the way!)

Here it is: Push for pedestrian safety in Kits Park by taking away the designated cycling routes that go along the crowded beachside path and through the parking lot, mixing dangerously with pedestrians up to Yew and along Cornwall. Dust off the engineering study that proposed a protected perimeter bike lane along Ogden, Arbutus and beside Cornwall.

As you know, this was named as a priority by your two successors as park board chair, so you can be seen as a Great Unifier. You will also, of course, be unifying support from seniors and everyone else who just wants to walk and cycle safely in our parks. Some cyclists may even overlook your Stanley Park “disaster” misstep. That’s a lot of votes!

In the unlikely event you don’t take me up on this, I’ve got a Plan B (politicians have to be flexible!):

Double Down! Renew your support for Kits Park as is, including the bike ride for families and seniors on their new e-bikes, weaving through cars backing up in the parking lot. Then designate this, the last remaining dangerous section of the Seaside Greenway, as a Heritage Alley.

It will inevitably be fixed, by a future park board or even, God willing, this one.  But you can get credit for celebrating a remembrance of how cyclists used to mix it up with pedestrians and parking cars, endangering both of them, before hundreds of thousands of cyclists became visible to all politicians.

It may be worth a few votes.

“Stanley Park for Everyone” – The Video

“Stanley Park for Everyone” – The Video

In a World of Acrimonious Political Discourse, Pamela Goldsmith-Jones Has Some Words of Hope