Victoria-based transportation Todd Litman (VTPI) is out with his latest book – New Mobilities – which he explains and discusses on a recent Eno webinar:

As always, VV learned a few things (like the Litman Glamour/Benefits Inverse Relationship) and noticed that Todd (unlike more cautious consultants) was actually making some predictions about transportation for post-Covid times.  Now there’s an irresistible topic for a Chatbox – and so, for transport nerds everywhere, we present:

VV: Hey, Todd – you give good Evo.  But let’s get you on the record with some prognostications for our immediate post-Covid future (if ever).

WHAT’S GOING TO BE THE BIGGEST CHANGE AS A CONSEQUENCE OF THE PANDEMIC?

Todd: I think that demand for active travel (walking and bicycling) and micromodes (e-bikes and –scooters) has increased and much of this will continue in the future.

Of course, some “preppers” moved from cities to automobile-dependent suburban and rural areas, although this actually increased their health risks (see Pandemic Resilient Community Planning ). I suspect that those changes will be temporary; isolated living is limiting and tedious, while cities offer too many benefits, or you could say, “temptations.”

VV: I’m betting the biggest impact for many was trying something with a little electric motor and battery, whether on their e-bike or skateboard (and other weird devices like monowheels).  Once you’ve had E-assist, you aint going back – and then you convert your friends.

Todd:  Yes, micromodes like e-bikes and scooters are very functional, relatively affordable and fun! They have tremendous potential for increasing transport efficiency in cities and suburbs.  A third of all local auto trips could be made by active and micromodes.

VV: ‘Micromode’ – our word of the day.  Let’s use in a sentence: Vancouver is becoming micromodish!

WHEN WILL AUTOMATED VEHICLES BE UBQUITOUS AND AFFORDABLE?

Todd: Autonomous vehicle technologies are improving, but much more slowly than optimists predict. The current generation is limited, problematic and expensive.*

For example, Tesla’s Autopilot system can only be used under certain conditions, requires a driver at the wheel at all times, has caused crashes (including fatalities), and costs about $10,000. Autonomous taxis are being tested in a few areas, but also limited, problematic and not profitable.

Level 5 autonomous vehicles (i.e., able to transport a non-driver under most conditions) may become commercially available in five to ten years, but will probably be expensive and limited.  Vehicle purchasers will need to decide whether to pay $10,000+ extra for a vehicle that, when a desired destination is entered, will sometimes respond with “Sorry, I can’t go there” due to snow or heavy rain, or because the destination is outside the special mapped area, or on a dirt road; and will sometimes stop, when faced with a confusing situation, to await instructions from a human. They will sometimes be frustratingly slow.

As a result, it will probably be 2030 to 2040 before autonomous vehicles represent a major portion of new vehicles, and therefore 2040s to 2050s before they are common in the vehicle fleet and affordable to moderate-income households that purchase used vehicles.

AV implementation may occur more quickly for bus and freight travel, but that will introduce additional problems. For example, bus drivers provide additional services such as information and security, and delivery vehicle drivers also load and unload goods. As a result, not every use will switch immediately.  (Here’s my report on “Autonomous Vehicle Implementation Predictions”.) 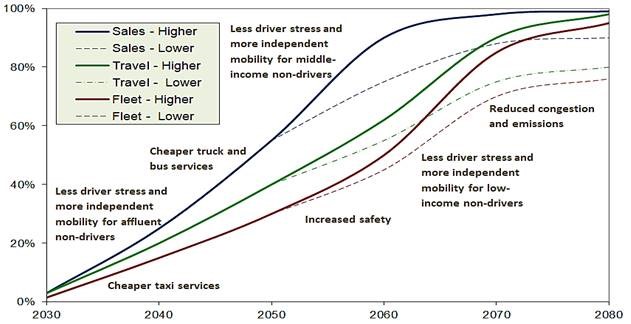 VV: I wonder whether the real impact will not be full automation but all the technology to reduce collisions.  The driving force (ha!) behind rapid change won’t be the pull of the new but the push of insurance costs.  If you don’t have the technology, the cost of liability escalates every year. That may drive (double ha!) people into new vehicles or shared plans much faster than depreciation, even if it costs more than you’d like.  Otherwise you end up paying a lot more for insurance.

Todd: Optimists argue that AV will reduce crashes by up to 90 percent.  But this overlooks new risks, including hardware and software failures, malicious hacking, increased risk taking and additional crashes caused by increased vehicle traffic.  Let’s see if that actually achieve their predicted safety goals.

WHEN WILL MY PIZZA AND BEER BE DELIVERED BY DRONE?

Todd: Drone delivery may be appropriate for urgent, high-value uses such as delivery of medicine to isolated areas, but that is a tiny market. If you are my neighbor, I hope you will never receive pizza and beer by drone; I don’t want to bear the noise, risk and loss of privacy they impose, and so people will advocate that their use be restricted.

VV: What if I order it with extra antibiotics?

OF ALL THE NEW MOBILITIES, WHAT’S GOING TO BE THE MOST ADOPTED AND SUCCESSFUL?

Todd: Active transport, micro modes, car- and bike-sharing, transit service innovations, telework and electric cars are all being adopted now. Mobility as a Service (MaaS), mobility prioritization and logistics management are also being implemented in some situations, but will probably take a decade or two to fully develop.

I am skeptical that autonomous vehicles, tunnel roads, pneumatic tube transport, air taxis or drone deliveries will be widely successful during the next two decades, although they may have some small-scale successful applications.

I suspect that when autonomous taxi services become available, many travelers will choose to pay a premium for the additional cleanliness, sociability and security provided by a human driver.

VV: I notice that the best bets are some of the smallest and cheapest, whereas the ones that capture attention – the glamour pussies – are the latest versions of sci-fi predictions: Elon Musk’s tubes and flying cars (always with the flying cars!).  Expensive, elitist and silly.  I’m calling this the Litman Glamour/Benefit Inverse Relationship.

WHAT WILL BE THE HOTTEST NEW FIELD OF STUDY A PLANNER/ANALYST SHOULD GET INTO TODAY?

Todd: A planner who becomes an expert on an emerging issue, such as autonomous vehicle implementation, efficient curb and parking management, active and public transport planning, or logistics management has job security. Choose the issue that is closest to your heart and that others are overlooking.

VV: That’s good advice for life in general.  Thanks, Todd.

*Todd’s not the only one who’s sceptical: If Waymo Can’t Do It Then I Wonder If Anyone Can.  “Will self-driving cars ever be a thing? Virtually all of the evidence still points to: No.”

If you want more Toddisms, check out this debate he had with Randal O’Toole on the future of transit after Covid.

Why Virtual is not Enough: Craving the Contact & Connectivity of Public Spaces